The esteemed Peirce scholar and historian of logic Irving H. Anellis passed away on the 15th of July, 2013.

“It is with great sadness that I announce that Dr. Irving H. Anellis, a long-time Contributing Editor and Visiting Research Associate of the Peirce Edition Project in the Institute for American Thought, has just passed away. Dr. Anellis became a Contributing Editor for logic and mathematics in 1989, and a Visiting Research Associate in 2008 after he moved from Fort Dodge, Iowa to Indianapolis, Indiana. He taught “Intermediate Symbolic Logic” and “Advanced Symbolic Logic” at IUPUI during the Fall of 2009.

With his passing we have lost one of the nation’s preeminent historians of logic and mathematics. Dr. Anellis received his Ph.D. in philosophy from Brandeis University in 1977 with a dissertation on “Ontological Commitment in Ideal Languages: Semantic Interpretations for Logical Positivism.” Since then, he built his reputation through a life entirely dedicated to scholarship. We owe him more than 430 publications, among which four books (including his 1994 Jean van Heijenoort: Logic and Its History in the Work and Writings of Jean van Heijenoort, and his 2006 Evaluating Bertrand Russell, the Logician and His Work); and 103 articles on the history of logic, 211 reviews, abstracts, or notes, 36 edited works, and 78 pieces on subjects as varied as psychology, philosophy of mind, artificial intelligence, cognitive sciences, mental health, Soviet philosophy, history of science, Russian and Soviet history and culture. A student of historian of logic Jean van Heijenoort, Anellis’s early research centered on mathematical logic, in particular in proof theory and metamathematics, and on applications of logic to algebraic structures, including Boolean algebras and group theory. His recent historical research focused on the work of Bertrand Russell in set theory and logic and of Charles Sanders Peirce in algebra and algebraic logic; on the history of proof theory, especially regarding the roles of the Löwenheim-Skolem Theorem and Herbrand’s Fundamental Theorem; and on the history of logic and mathematics in Russia. Dr. Anellis was also much interested in applications of mathematics in linguistics, psychology, education, and in the logic of mental acts, the logical formalization of intentionality, and the logic and algebra of neural networks. His philosophical interests encompassed the philosophy of logic and of mathematics, Austrian realism, phenomenology, and logical positivism. He was the founding editor of the journalModern Logic, served as a reviewer or referee for numerous journals, and as a contributor to several academic societies or commissions, including most recently the advisory board of the Hilbert-Bernays Project.

Irving Anellis was a modest and delightful person, sweet and humorous. His was a life of service to knowledge, and the Peirce Project has immensely benefited from his encyclopedic mind. Over the last few years Anellis wrote hundreds of detailed annotations for our volume 11, which will contain the 22 chapters of Peirce’s unpublished masterpiece, “How to Reason: A Critick of Arguments” (1894). Anellis was far from finished with this painstaking work, but the legacy he leaves us will make of this volume a monument to his prodigious mastery of the entire history of logic. He was also working on numerous other projects, including his long-planned magnum opus, “From Algebraic Logic to Logistic,” which was to be a summation of his work in the history of logic, and a special essay on “The History and Development of Mathematical Logic, from Descartes and Leibniz to the Present,” to be published in the Encyclopedia of Life Support Systems, UNESCO.

One of Irving’s favorite sayings was Peirce’s remark, “One’s special knowledge of logic can be a painful cross to bear but duty demands that you fulfill your calling.” Irving bore such a cross and fulfilled its duty with admirable resilience and simple grace. We shall long remain in his debt.” 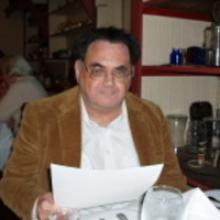